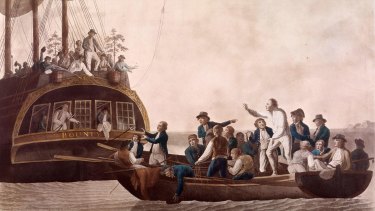 The Bounty review: How Peter FitzSimons and Alan Frost see the mutiny

These two books are as different as their two leading characters. William Bligh possessed preternatural skills as a sailor and navigator but he was not a leader of men. He was sometimes bold and courageous but he lacked moderation and humanity; and he was all too often motivated by self-advancement and the accumulation of money and prestige.

Bligh attained high office, ascending through the ranks of the Royal Navy and retiring as a Vice Admiral of the Blue, but his thrusting nature, overbearing personality and abrasive temper ensured that he never earned the respect of those who served under him and really knew him. His career – starting with the death of Captain Cook and ending with the only overthrow of an Australian government – was marked by frequent misjudgment, a great deal of bastardry and occasional brilliance.

Fletcher Christian, on the other hand, is an almost mythic figure; a handsome, well-born young man stretched to breaking point by a brutal captain. In April 1789, he seized the Bounty, put Bligh and 18 men in one of the ship’s boats, collected a group of men and women on Tahiti and, after wandering the seas, established a self-sufficient settlement on an uninhabited island known as Pitcairn. The drama and romance of these events influenced Wordsworth (The Prelude), Coleridge (The Rime of the Ancient Mariner), Tennyson (The Captain), Byron (The Island) and even Jules Verne (The Mutineers of the Bounty).

The community on Pitcairn survived and multiplied and continues to exist to this day. There was conflict and mayhem in the early days and most of the mutineers destroyed themselves with lust, liquor and murder. But when an American sealer arrived in 1808, Captain Mayhew Folger found the last surviving mutineer, John Adams, presiding over a model Christian community with a dozen or so Tahitian women and a brood of children – “about three dozen in all”. Quite what happened to Fletcher Christian is a mystery but both authors point to intriguing evidence that suggests he may have secretly returned to England.

Bligh and all but one of the men in the open boat miraculously survived a 47-day, 3500 nautical mile voyage to Timor. They had a sextant, a quadrant, navigational tables and a compass and were blessed by favourable winds, but their food and water were severely limited. When Bligh returned to London in March 1790, he was exonerated by the mandatory court-martial and presented to the George III. In short order, he published his Narrative, was promoted to Master and Commander, then again to Post Captain.

But as time passed a different, less flattering picture emerged, courtesy of the unflagging efforts of Edward Christian, a professor of law at Cambridge and the elder brother of Fletcher Christian. Bligh’s true nature was revealed in a decidedly unfavourable light. And Fletcher Christian was depicted as a good-hearted, popular deputy who broke under intolerable emotional pressure.

Alan Frost is an eminent historian, best known for his seminal works on Arthur Phillip and the First Fleet. Peter FitzSimons, who writes for The Sydney Morning Herald, is first and foremost a storyteller and the author of many well-known historical works. While Frost’s book is steadily illuminating; that of FitzSimons is rollicking good fun and difficult to put down. FitzSimons’ technique of writing history in the present tense and including invented dialogue may offend the purists but it is part of his inimitable style. And he is upfront about it. His book is constructed in the manner of a novel but with numerous footnotes, ably assisted by his researchers.

The object of Frost’s book is to puncture some well-known myths and tropes, and to investigate where the truth really lies. No one seriously interested in the story of Bligh, Christian and the Bounty should fail to read his book and absorb its lessons. One of those lessons is that primary sources are not necessarily reliable. In particular, nothing is more unreliable than the self-serving evidence of a man writing in his own interest with any eye to posterity. Frost explains how Bligh’s logs, journals, accounts and narratives studiously suppressed any fact or circumstance that might possibly have reflected adversely on his character, reputation and prospects for advancement. He was selective to the point of dishonesty.

Another lesson is that it is necessary to assess the events of the Bounty’s voyage with an understanding of the realities of life in the Georgian navy. Bligh’s intemperate and abusive language was barely tolerable but there was another more significant factor. For Bligh was the ship’s purser as well as its captain, responsible for its provisions, stores and supplies and for accounting to the Victualling Board. The role required integrity, fairness and fastidious record-keeping. And it was notorious that an unscrupulous purser could benefit himself financially by giving his crew short rations and manipulating the accounts.

As Frost demonstrates, Bligh was a cheat who sought to profit from his role. The examples are numerous. It is no wonder that, as he was cast adrift, a mutineer sneered “It is a serious affair to be starved”, while another added the riposte “Let the bugger see if he can live on three-quarters of a pound of yams per day”.

A third lesson is that where there are gaps or irreconcilable conflicts in the documentary record, the writer of history should resist the temptation to engage in speculation, supposition, amateur psychology and dubious theory. They obscure more than they enlighten. Frost points out, for example, that we have very little sound information about life on Pitcairn Island in the first 10 years of settlement and it is simply not possible to discern the truth by some unspecified process of intuition. We know that the society fell apart, leaving only Adams, a group of Tahitian women and the mixed-race progeny of the mutineers. But at least 25 accounts of what happened on Pitcairn between 1790 and 1801 surfaced over the following 80 years and to some extent, none is entirely satisfactory, few are wholly consistent and most are problematic.

This is where FitzSimons excels – in a sense. For his writing exists in the nether world between history and fiction, neither fully one nor the other. His entertaining description of life on Pitcairn is partly a work of invention, built on legend, a fertile imagination and secondary sources that repeat other secondary sources.

There is indubitably a core story of murder and massacre but FitzSimons embroiders the story with a trained eye for the lurid and sensational. And his portrayal of the sexual proclivities, couplings and unashamed sharings of this unique community is a minor obsession. But the reader is forewarned. The book’s cover flamboyantly proclaims “sex” as one of its major themes – ahead of “mutiny”.

The story of the Bounty is one of the most compelling tales the world will ever know. FitzSimons’ vast 600-page tome is a good read and a fast-paced narrative but you can never be quite confident about the facts. Frost’s slim book on the other hand is indispensable for anyone with a genuine interest in understanding the truth.